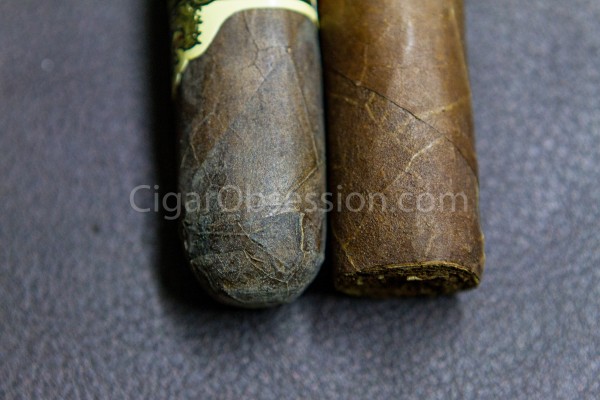 I have seen this asked for what seems an eternity on the internet and nine times out of ten someone is showing an oldie & moldie, not plume. Or bloom, as you prefer to call it.

What the heck am I talking about you might ask? I’m talking about the VERY rare occurrence of the crystallized oils coming out of a cigar after MANY years of proper storage. Like many. Like more than any shop is going to keep anything unless it falls behind a rack accidentally. For a decade. What commonly happens unfortunately though, is some lame-ass shop keeper or know-it-nothing employee passes off completely ruined moldy inventory to unsuspecting and trusting customers as something to be desired or pay more for.

In preparing to sell some of my long term aged stuff ( I wasn’t kidding about the age), I figured I would make this post and show you all what plume REALLY looks like. In short, NOTHING like any of the molds that commonly occur. Which is a vast assortment I might add. There are TONS of horribly wrong articles on the net about this subject, many of which say mold must be this or must not be that. Mold comes in a ton of shapes, sizes and colors, and is never good, period. You can save a cigar as long as the mold growth is contained to the outside, but once it hits the foot, toss it. And clean out your humidor for spores or it’ll just spread again.

Plume (bloom) on the other hand can ONLY look like this. It’s only one thing and only happens over LONG periods of sitting. Above you see a 10 year aged Ashton VSG and a newer example. Plume is like a tiny sugar coating. Very light, the color of ash. It’s literally tiny crystals coming out of the leaf. It feels like very fine sand and almost looks like a dusting of ash. It forms all at the same time, very very slowly. Note, not all cigars will ever form it. Don’t ask me why. But there you go, if it looks anything other than that – it’s mold.

You can click the pic for a full size version to get a real good look.

Category : Informational
Become a Subscribestar!
Join the Facebook group HERE
CO Amazon Store
Best Cigar Setups
How To Ship Cigars
How To Cut, Light & Smoke A Cigar
How To Taste Flavors In A Cigar
Answering Viewer Questions
How To Build A Coolidor
Take Better Phone Photos
Maintaining Your Beads
Is It Plume?
Is It Mold?
Cigar Bands Show
Hygrometer Calibration