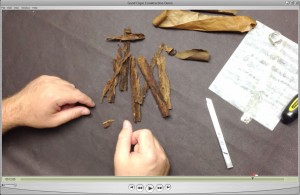 In the open call for Answering Viewer Questions, someone asked if I could demo deconstruction of a good vs. poor cigar. While I can’t, because I don’t know a cigar has poor construction until it’s smoked, I can show you a good one. Previous videos have already shown poor as I was smoking. I didn’t mind sacrificing this one for two reasons. First and most importantly, I knew with 100% certainty it was constructed right – because I made it. All of it. Second, it sucks 🙂 I’m a terrible blender and roller, they came out pretty bad, at least the last time I tried it. I’ll revisit them at some point but am in no hurry. Anyway, I show you how the vast majority of properly constructed cigars should be.