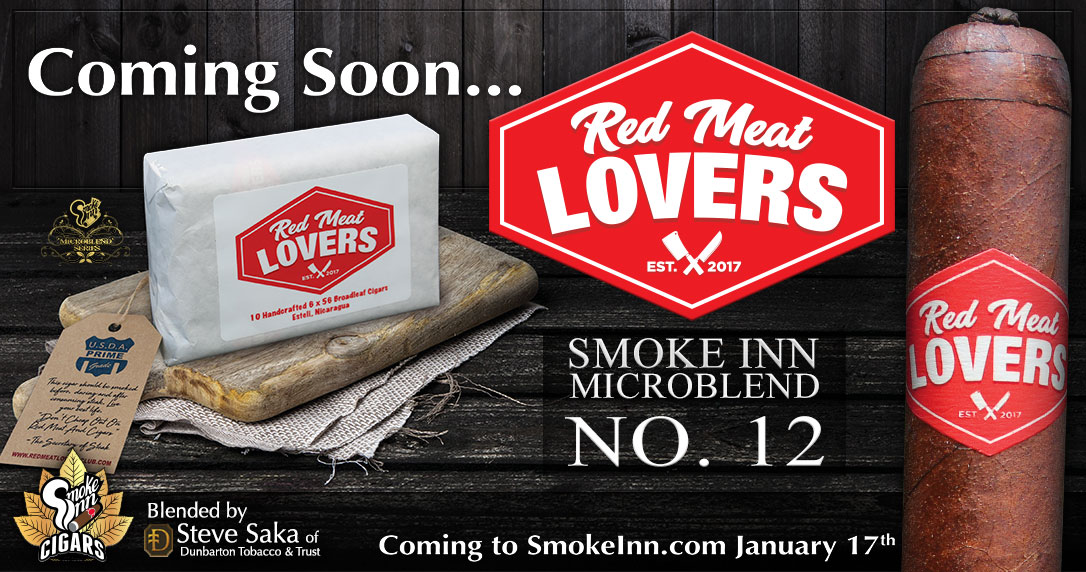 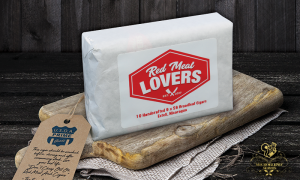 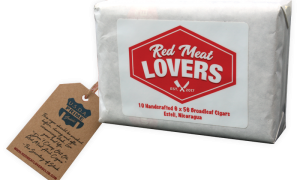 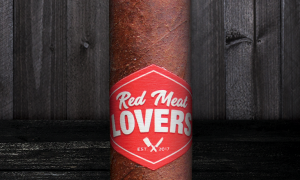 PRESS RELEASE
Smoke Inn Announces 12th Cigar in Microblend Series
Monday, December 18, 2019 — Boynton Beach, FL – Smoke Inn Cigars has partnered with Steve Saka of Dunbarton Tobacco & Trust and South Florida’s Red Meat Lovers Club to introduce the 12th offering in the world-famous Microblend Series of craft cigars.
For this unique collaboration, renowned ligador (cigar blender) and longstanding guru in the craft cigar scene, Steve Saka, has combined his congruent love for high-grade tobacco and savory red meat, crafting a cigar to pair perfectly with steak dinner.
Steve Saka, proprietor of Dunbarton Tobacco & Trust, commented, “This is one of those projects that I was beyond excited to do.” He continued, “Cigars and steaks go hand in hand, but to my knowledge, no one has ever actually developed a blend specifically created to be enjoyed intentionally together as a ‘pairing’. You would think this would be a rather straightforward task, but I took the responsibility very seriously in the selection of the various tobaccos to best compliment the hearty nature of the beef. It required the sacrifice of many fine heads of locally sourced beef!”
To accomplish this carnivorous task, Saka blended the cigar in Estelí, Nicaragua, while “under the influence” of the country’s finest beef—an export-grade prime porterhouse known as “chuleta de dos lomos.” This lead to the selection of a Connecticut Broadleaf No. 1 Dark wrapper, secured over a San Andrés Negro Oscuro binder and a hearty filler recipe of Nicaraguan and American tobaccos. This choice selection of tobaccos clocks in at “Level 3” in terms of strength, which is tabacalera speak for “GUT-PUNCHING FULL.”
The cigar, which has been titled “Red Meat Lovers Club,” is named after the South Florida-based brotherhood of the same name; where fellow “lovers of the beast” gather in regularly held “meatings,” bonding over their common desires to “eat beef, drink, smoke, and laugh.”
“When Abe told me that my organization, Red Meat Lovers Club, was selected as a partner in this cigar project, I had to put down the bone-in ribeye I was eating for breakfast, and I yelled out, ‘that’s delicious!'” commented Evan Darnell, aka “The Secretary of Steak” for the RMLC.
With the Red Meat Lovers Club cigar, Smoke Inn is inviting fellow “Steaksmen” across the country into the brotherhood, encouraging men and women across the nation to share in our common love for life’s most savory rewards. As we have done with past Microblend cigars, the Red Meat Lovers Club will be available exclusively at Smoke Inn retail locations and through our online store—smokeinn.com. Sales will begin online at Noon Eastern Standard Time on January the 17th, 2019. Only 500 soft-pack bundles of 10 cigars have been made, featuring a single 6″ x 56 size (complete with a skillfully rolled Rosette Pigtail cap) that has been tailor-designed to outlast even the most formidable cuts of beef.
Red Meat Lovers Club is loaded with robust, heavy-hitting flavors of charred meat, earth, dark chocolate, fat, and the elusive umami—in other words, the craft smoker’s new go-to choice for pre, post, and during-dinner smoking sessions.
For more information contact Smoke Inn at 1-888-SMOKES-1
Red Meat Lovers Club