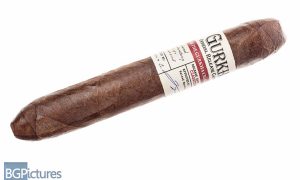 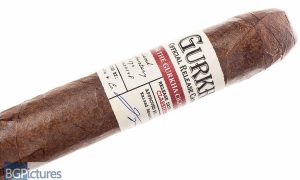 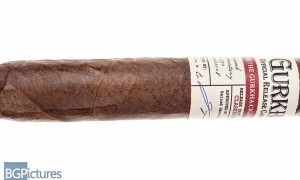 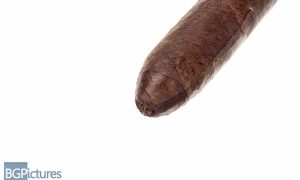 This 6×58 stick features a dark chocolate slightly mottled wrapper with a soft even pack, minimal veins, tight invisible seams, large triple cap and mild sweet wood aroma.  First light reveals a great draw with decent smoke output showing very mild soft sweet cedar notes on the draw and finish.  The first third proves to be problematic due to a suspected underfilled roll combined with the large RG.  It doesn’t want to produce smoke without double puffing, which is leading to the whole thing going hot and squishy.  Flavors are unchanged, barely anything is coming through.  The tail end of the first third finally wakes it up, bringing the body up a tick to mild-medium, snugging the draw to normal and producing much better smoke.  The 1/2 way point comes at 45 minutes dropping the ash in a solid chunk.  Performance is perfect with a razor sharp burn while flavors just change slightly adding a touch of pepper to the finish.  Ending at 1:25 the last third came up to a solid medium body, dropped the ash in another large chunk and burned perfectly.  Flavors transitioned to a creamy textured deep earth and pepper with a touch of liquid smoke.  Thank you to Gurkha for sending this for review!

Category : Cigar Reviews
Become a Subscribestar!
Join the Facebook group HERE
CO Amazon Store
Best Cigar Setups
How To Ship Cigars
How To Cut, Light & Smoke A Cigar
How To Taste Flavors In A Cigar
Answering Viewer Questions
How To Build A Coolidor
Take Better Phone Photos
Maintaining Your Beads
Is It Plume?
Is It Mold?
Cigar Bands Show
Hygrometer Calibration