Guy Stuff How To Do A Brake Job 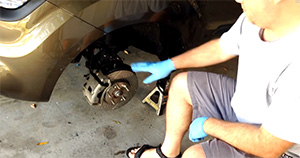 This was originally going to be a tidbit video on my HLO channel but a couple people suggested it would be a good fit for Guy Stuff, so why not! I know, you don’t have to say it – 48 min for a brake job vid?! Well it’s not just the quick 10 step how to vid like most out there. I speed some parts up but take you through the basics, show you some common problems, explain why you want to do certain things, explain how it all works and try to give a little education along the way 🙂 This vid will cover the vast majority of vehicles on the road, so you don’t need to be working on a 2012 Kia Soul like mine. There’s absolutely nothing special about this car, it’s a simple single piston disc brake model and I give it a little upgrade. The car originally came from Ohio so it had a bit of a rust problem on some of the stock parts, and I show you how to deal with those too. Every guy needs to know how to do basic car repair!

EDIT: To everyone with an opinion on everything – consider there is info you are not aware of before posting. For example the torque wrench you see me use is simply an old unit I keep around for use as a breaker bar/lug wrench. Not all cars come with one – such as the Soul and my previous MINIs, you have to provide your own.