In an industry divided between the old traditionalists and the contemporary innovators, the Auténtico Maduro is a new boutique with an old soul. William Flores, President of Hoja de Flores, said, “we are proud to continue the tradition of quality and innovation which was exemplified by my father Carlos over fifty years ago.” 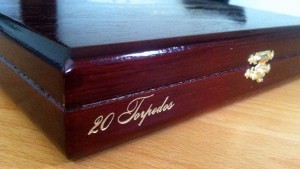 The new Auténtico Maduro is a Dominican puro that features a Corojo 2006 maduro wrapper. A blend of original piloto, ligero and seco Dominican fillers marry to create a smoke of exceptional strength, complexity, and smoothness.

“There is a conception among some that only Nicaraguan tobacco packs the punch,” said J. Carlos Gomez, Executive VP. “The Auténtico Maduro is uniquely cured to deliver a taste that can rival any other in strength, but also deliver the complexity that made Dominican tobacco legendary.”

On its 50th anniversary, the legendary Flores lineage has achieved its ultimate pinnacle of ﬂavor, body and aroma: the new Hoja de Flores cigar. The new cigar will be sold in boxes of 20 and at a suggested retail price of $12.00 per cigar.

About Hoja de Flores
Hoja de Flores, owned by William Flores, is a revival of Flor de Florez, the iconic company that led the cigar industry in the second half of the 20th century.