Press Release: Camacho – bold is back with a vengeance

Bold is back with a vengeance!

–– The World’s Leader in Bold Cigars Reveals Most Brazen Move In History ––
PINELLAS PARK, FL (Wednesday, June 12th, 2013) –– Camacho, the world’s leading brand of bold cigars,
today revealed one of the most brazen moves in their nearly fifty-year history. The brand is taking an
aggressive stance on the future and aims to reset the bar for bold and full flavored cigars. Nearly all
elements of Camacho have been intensified; starting with a bolder brand identity, a fierce assortment of
revamped blends, stunning packaging, and an array of killer consumer experiences that sum up this effort in
one simple statement – Camacho is back and bolder than ever.

The new branding, which features an aggressively-poised scorpion, is a fusion of both the old school
heritage and modern day vibe of the brand. The Scorpion mark, a nod to Camacho’s aggressive and
entrepreneurial spirit, personifies a number of core characteristics of the brand: power, fearlessness,
passion and competition. “The core values and DNA of who we are have not been altered, the volume has
been cranked and the focus has been intensified. Our new image is a strong representation both of what we
were and who we have become. It’s a badge of honor to be worn by the powerful, elemental person who
seeks to live his life the way we do – all-out and full throttle,” said Dylan Austin, head of marketing for
Camacho.

Four out of the six blends have been upgraded and taken to heights that most cigars have never dared climb.
“We did an immense amount of work on the blends. It wasn’t about reinventing what people had come to
love; it’s been about getting back to what they had come to love and making additional upgrades along the
way. Impact is the most important component of our cigar-making philosophy, along with consistency.
We kept what was great, like our Authentic Corojo, and made it better. For our famed Corojo, a top-grade
fifth priming wrapper is now standard – it’s back to knock your socks off level”, said Austin.

One of the most impactful components to the reintroduction is Camacho’s new team of co-conspirators and
curators of bold lifestyle. Hall of Fame NFL football player and coach, Mike Ditka, Room101 brand owner,
Matt Booth and screenwriter, Rob Weiss, have joined Camacho to serve on what the brand calls, the Board
of the Bold. “Coach, Booth and Weiss are guys that live the Camacho way of life, they do it pedal to the floor
everyday and pull no punches. Each of them anchors what we stand for down to the core, all of them have
accomplished great things in life because of their boldness,” says Austin.

Camacho will hold a national release party on June 20th in Dallas where the brand will be unveiled for the
first time to media and over 400 hardcore cigar enthusiasts. The launch event is open to the public and
those interested in attending can RSVP on Camacho’s Facebook page (facebook.com/camachocigars). Also
in the works, is a new, immersive in-store brand experience centered on exploring big taste, excellence in
craft and celebrating men big enough, bad enough, bold enough to destroy the status quo. To increase the
impact of these events, Camacho has teamed up with bourbon distillers, craft beer makers, local chefs and
custom car companies. “The Bold Standard” in-store events are expected to kickoff in late August. For a full
schedule of events stay tuned to www.camachocigars.com or visit the brand’s Facebook page.

–– FOR IMMEDIATE RELEASE ––
While the official unveiling will take place in late June, the new Camacho will not go on sale until the 2013
IPCPR Trade Show in Las Vegas, which is set for the middle of July 2013. The new standard in bold cigars
is expected to be on display at retailers nationwide by the beginning of August.

ABOUT Camacho:
Camacho is the world’s leading brand of bold cigars, representing the concept of unleashing unmistakable
and intense experiences. Infamous since 1962, the brand has become a sanctuary for the powerful,
elemental being who seeks to fill their lives with unapologetic good times. A combination of rich heritage,
product excellence and a never surrender attitude has enabled Camacho to grow into an aggressive brand
globally recognized as the standard of full-frontal flavor and full-frontal lifestyle.
For more information about Camacho, please visit www.camachocigars.com or follow the brand on
Facebook (facebook.com/camachocigars) and Twitter (twitter.com/camachocigars). 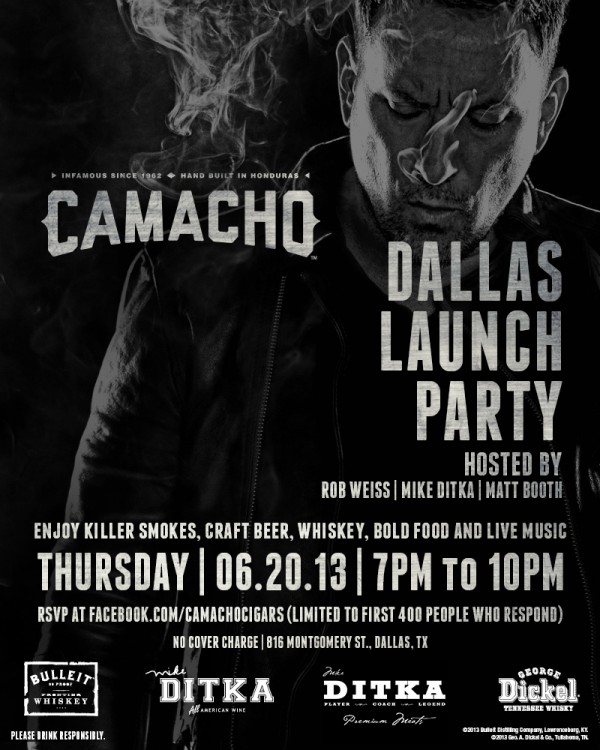