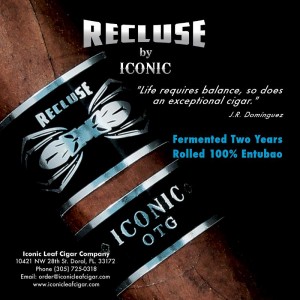 We are pleased to announce that we have completed the blend for our upcoming special edition release of Recluse. It is called the Recluse Draconian. It will be made in three vitolas called Sidewinders. Sidewinders are another new shape that we have created. As we did with our Kanu’ shape, the Sidewinder shape has never been done before in the cigar industry. It will remain undisclosed until its release at this years IPCPR July 13th-17th.
A few select retailers will get an advance release of the Recluse Draconian blend in three box pressed sizes. Recluse Draconian will be rolled in true Entubar fashion as is every cigar that is rolled in the Tabacalera Leyendas Cubanas factory.

This blend was created in keeping with our philosophy of creating flavorful, well balanced blends that are smooth with many transitions.
We are proud that we have been able to bring quality and innovation together. This is only the beginning.

Tabacalera Leyendas Cubanas, which means Cuban Tobacco Legends, is run by J.R. Dominguez; he comes from generations of cigar manufacturers and he wants to have the greatest factory in the Dominican Republic.

The first blend released from this factory is the Recluse.

Every leaf in the Recluse, the wrapper, the filler and the binder is fermented for Two years.
Additional steps taken that separates the Tabacalera Leyendas Cubanas from others include 100% Entubao rolling. Every cigar that’s rolled in the TLC factory is rolled in the cuban style of ‘entubao’. Entubao means tubing. What we do is instead of bunching and pressing the filler, which can affect the draw, we take each filler leaf and roll it up into an individual tube and then we pull those three tubes together which creates three air channels. What you get with the three air channels is an effortless draw. By doing it this way you can do a better box press on the cigar. When you’re compressing the airspace on a cigar, you’re basically
reducing the amount of combustion that you have because the airspace
is reduced. So what you get with entubao is an effortless draw as well as a cooler, slower and straighter burn. The cigar refuses to burn hot.

We have invented new shapes ; we’re blazing a new trail. The OTG on the Recluse stands for Off The Grid, because that’s the way we do our whole business model. The new shape is called Kanu’ It’s really ‘a Picasso’.