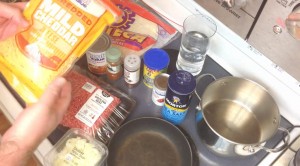 Today we have one of my favorite Fast Food meals, that has been gone for quite a while, the Chilito! As a kid I worked summers at Taco Bell in the 80’s, and back then they really had some awesome stuff – unlike today. Kids today might think Taco Bell is great, but back then – it was AWESOME! The Chilito was a cheesy chili burrito, a little smaller than the Burrito Supreme, in a thicker tortilla that was steamed. I’ll never forgive them for taking it off the menu 🙁 At least I can make them *almost* as good anytime I want to at home, and now I’ll share how with you 🙂