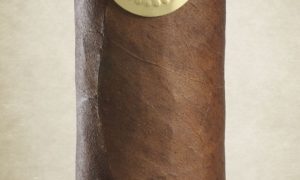 Davidoff expands the “Puro d’Oro” Series introduced in 2010 with a new shape, the Super Robusto Gigantes captivates through its imposing Super Robusto Format. The impressive extension of the “Puro d’Oro” line reverts back to the old tradition of cigar making, made entirely with tobacco from one country of origin, the Dominican Republic. The exclusive Davidoff Yamasa leaves wrapping every Puro D’Oro cigar are grown in wild, iron rich soil, full of nutrients and blessed with many hours of sun. Working this wild earth took time, knowledge and patience. Now, after many years, we have tamed it to craft a powerful yet surprisingly refined blend. The majestic Super Robusto format enables the intense aromas to develop in all their complexity and give memorable moments of pleasures. The attractive plait at the cigar head and the gold foot ring, which sits snugly around the wrapper leaf with its elegant sheen, further emphasize the trademark feature of this series. Richard Krutick, Head of Davidoff Marketing, said, “The addition of the golden Davidoff band, which will be featured on all Puro d’Oro cigars in the future, makes the Gigantes even more recognizable and distinctive.” The new Gigantes is an exciting expansion of the collection and is available June 20, 2012 in boxes of 10 at US Appointed Merchants.

A Century of Davidoff
The Davidoff Flagship Store in Geneva celebrated its 100th anniversary in 2011. Henri Davidoff, who emigrated from Kiev to Switzerland at a time of political unrest, opened his first tobacco store in Geneva in 1911, laying the foundations for today’s worldwide network of 65 Davidoff Flagship Stores. Henri’s son, Zino Davidoff, learned the tobacco trade from the ground up. He resided for several years in Central and South America to deepen his knowledge of tobacco and cigar making. In 1930, he returned to Switzerland and thereafter successfully managed the business over four decades. Zino Davidoff transferred the family business to the Oettinger Group in 1970.
Davidoff appeals to connoisseurs all over the world who seek to embrace The Good Life – the art of living and pleasure. The premium brand Davidoff stands for a culture of conscious enjoyment and reflection in today’s hectic world. Enjoyment of beautiful and precious things, the embrace of pleasure and of life itself, unites Davidoff with people all around the world who have come to appreciate our superior products and who expect the highest quality every day – a promise Davidoff has kept for over a century.
The Oettinger Davidoff Group – a Swiss family business steeped in tradition

With almost 3,700 employees around the world, the CHF 1.3 billion Oettinger Davidoff Group traces its roots back to 1875 and remains family owned to this day. The Group operates two distinctly different businesses: one focused on consumer goods distribution in the Swiss market, and one dedicated to its core business, the producing, marketing, and retailing of premium branded cigars, tobacco products, and accessories. The premium-branded cigar business includes Davidoff, Camacho, Zino Platinum, AVO, Cusano, Griffin’s, Private Stock, Zino, and Winston Churchill Cigars. The Oettinger Davidoff Group is anchored in a strong “crop-to-shop” philosophy, having pursued a vertical integration from its tobacco fields in the Dominican Republic and Honduras to its worldwide network of 65 Davidoff Flagship Stores.