Richmond, VA—To celebrate the launch of the new Hoyo de Monterrey website, General Cigar is rolling out a “Box a Day Giveaway” to share the unique flavor of the Hoyo Monterrey Reposado en Cedros® brand with cigar lovers across the U.S.

From now through July 31, 2012, consumers of legal smoking age are invited to visit the brand’s website (www.hoyodemonterreycigar.com) to enter to win a box of Hoyo de Monterrey Reposado en Cedros cigars, which feature a proprietary process called “Inmersión.™”

After being handcrafted by a handpicked team of artisans, each Reposado en Cedros cigar undergoes Inmersión, an innovative method of aging created at HATSA, General Cigar’s Honduran cigar factory. With this technique, each cigar is enveloped in fragrant cedar and left to rest for an extended period of time. The cigar matures to a complex, medium-bodied smoke that has won the brand stellar ratings and praise from the premium cigar category’s most discerning experts. 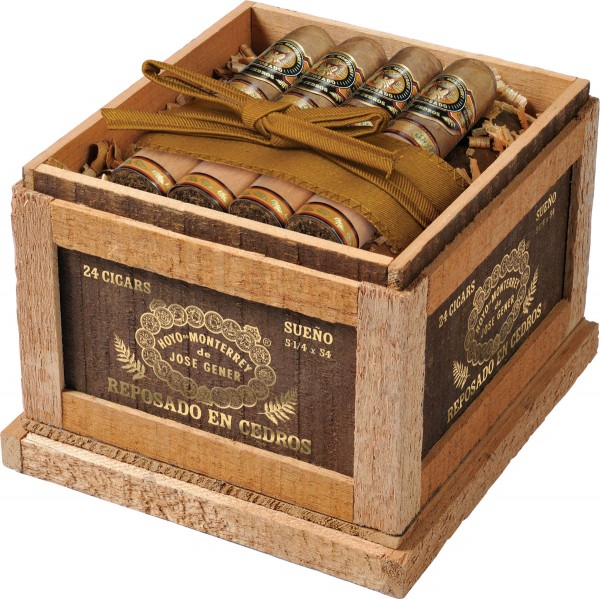 Winners of the Hoyo de Monterrey Reposado en Cedros “Box a Day Giveaway” will be announced every Monday on the brand’s website, as well as on the brand’s Facebook page and Twitter feed.

About Hoyo de Monterrey Reposado en Cedros
Hoyo de Monterrey Reposado en Cedros features three frontmarks, each packed in boxes containing 24 cigars. At 5 ¼” x 54, Sueño is a classic robusto that is available for a suggested retail price of $6.69 per cigar, while the Liso frontmark, a 7” x 49 Churchill carries an SRP of $6.99 per cigar. Marco, a figurado
(6 1/4” x 54) rounds out the collection with an SRP of $7.29 per cigar.

The cigars are packed in rustic wooden boxes, protected in canvas, and surrounded by cedar shavings to maintain the flavor and aroma imparted by Inmersión. Each box is truly a work of art, and continues the artisan tradition of the Hoyo de Monterrey brand.

™ Inmersión is a trademark of General Cigar Co. Inc.