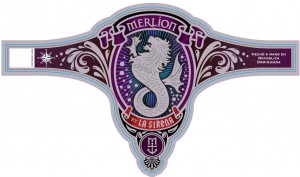 Miami, Florida – May 04, 2012 – In what one can term Beauty & The Beast; La Sirena and La
Aurora have teamed up to create a new cigar, Merlion.. The name Merlion comes from a
mythical creature that is half lion and half mermaid, the perfect fit for La Sirena and La Aurora.

The Merlion will be rolled at La Aurora Cigar Factory utilizing 6 different types of tobacco. The
wrapper is a silky looking Ecuadorian Corojo, while the binder is Sumatra from Brazil. The filler,
has 4 different types of tobacco including; Brazillian Bahia, Dominican Corojo, Dominican Criollo
’98, and Nicaraguan ligero to add that strength that you expect from a La Sirena cigar.
The Merlion which comes 20 in a box is available in 3 sizes, Robusto (5 x 50 / $9.00); Toro (5.5 x
54 / $10.00) and Gran Toro (6 x 58 / $10.50). All prices are before local taxes.

According to Brand Manager, Arielle Ditkowich “We are very excited to be working with
Guillermo and La Aurora, they have blended us a beautiful medium bodied cigar that is
extremely complex and offers a nice contrast to our existing line.”
The Merlion by La Sirena is expected to start shipping late June 2012.

About Miami Cigar & Company
Miami Cigar & Company, founded in 1989, is the exclusive US distributor of La Aurora brands which include Guillermo Leon & Leon Jimenes. They are also the worldwide distributor of Tatiana, Don Lino, La Sirena and Nestor Miranda line of cigars. They can found on the web at
https://www.miamicigarandcompany.com/ and https://www.facebook.com/miamicigarcompany.