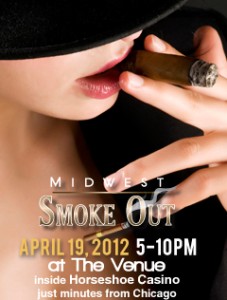 April 4, 2012- Hammond, Ind.,- The world-renowned General Cigar Company and nationally-acclaimed Midwest Smoke Out have joined forces to make this year’s April 19 even more outstanding. General Cigar Company will be the premium presenting sponsor and featuring La Gloria Cubana and Hoyo de Monterrey at The Midwest Smoke Out, which happens Thursday, April 19 at The Venue at Horseshoe Casino in Hammond, Ind., from 5-10 p.m.

“General Cigar Company and Midwest Smoke Out are a natural fit. The Smoke Out has a history of throwing the best cigar, fine spirits, gourmet food, luxury, gambling and exciting expo in Chicagoland while General Cigar is famous for its extensive history in the cigar industry,” said Andrea Pearman, creator. “General Cigar Company is legendary in cigar aficionado circles, with an incredibly rich history.”

up to form a worldwide company focused on cigars. Today, with President Dan Carr joined Swedish Match to continue building the brands he had been cultivating since 1996 as president of an expansive empire and in concert with a team of professionals and artisans in the United States, Dominican Republic, Honduras and Nicaragua, the future of General Cigar burns bright.

“This year’s Midwest Smoke Out will be burning white-hot,” said Pearman. “We have something for everyone: cigars, opportunity to meet cigar industry icons, spirits, beer, beautiful women, luxury giveaways, gambling and gourmet food.”

To further treat visitors, The Little Guys Home Technologies will raffle off a 32″ HDTV Flat Panel TV, Deer Creek Hunt Club will raffle off a one-year clay shooting membership, Schepel Cadillac is giving away a cigar cutter, Humidipak is giving away a humidor bag, Calumet Harley-Davidson is showcasing four motorcycles, Ping and Balmoral Woods are presenting a simulator and custom golf club fitting, Albert’s Jewelers will give vouchers for $50 off a $100 purchase, among other giveaways.

The raucous evening is set against a backdrop of Horseshoe Casino’s finest gaming tables and enjoyment, promising the best evening in Chicagoland for only $150. Attendance space is limited, and previous years’ expos have completely sold out in advance with 2012 following the same pattern, so explore www.MidwestSmokeOut.com, email Jo@3dms.com or call 1-888-226-0330 to reserve your ticket to the party today. To stay up-to-date with the most current information, like us on Facebook, connect on LinkedIn, or follow on Twitter at @MidwestSmokeOut