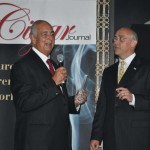 (Miami, Florida) July 28, 2011 – Toraño Family Cigar Company was bestowed a great honor as the patriarch of the family Carlos Toraño Sr. was presented with the Lifetime Achievement award by Cigar Journal Magazine to commemorate his service and dedication to the tobacco industry.

The Cigar Journal Magazine’s annual award ceremony took place on July 19, 2011 at Lavo Italian Restaurant located inside The Palazzo Hotel during the 2011 IPCPR Trade show. The ceremony was attended by leading figures of the tobacco industry, Grammy winner Arturo Sandoval, Hollywood producers, and other notables. The ceremony featured awards for 17 different categories. This year’s ceremony featured a twist as the trophy awarded to the winners was redesigned to resemble a crystal chaveta. In the words of the Cigar Journal the chaveta is the symbol of the cigar-maker’s art.

The ceremony was hosted by the Cigar Journal’s Chief Editors Reinhold Widmayer and Colin Ganley. After awarding 16 awards for categories such as best brand, best cigar, etc. there was only one crystal chaveta left. After a short introduction Widmayer announced Carlos Toraño Sr. as the lifetime achievement award winner. Too much applause, Carlos Toraño Sr. walked on stage and graciously accepted the award from Widmayer. Carlos Toraño’s first words were that he was humbled to receive such an honor. After a short speech he walked off stage to pose for pictures with his son and current president of Toraño Family Cigars Co. Charlie Toraño. Charlie was heard whispering in his father’s ear, “Congratulations, you deserve this dad”.

On winning the award Carlos Toraño Sr. stated, “I am truly honored to receive this award from Cigar Journal Magazine. This industry has been very special to my family and I, and we look forward to continuing the Toraño tradition for years to come.”

Founded in 1916 by Santiago Toraño, the Toraño Family Cigar Company is recognized as one of the oldest tobacco families in the cigar industry. Carlos Toraño, at the age of 16 was part of the nationalization of Cuba in 1959, where his family’s tobacco fields were taken away and were forced to leave the island. The family however continued to seek out the finest quality tobaccos from many countries around the world. After being educated in the United States, Carlos Toraño Sr. joined the family business and followed in his father’s footsteps by continuing the tradition and legacy of his grandfather in buying and distributing tobacco. In 1997, the family owned and operated its first factory in Nicaragua and launched the Carlos Toraño brand.

A leader in the cigar industry, Toraño Family Cigar Company is a four generation company currently based in Miami, FL. It enjoys a rich heritage and history in tobacco growing and manufacturing. For more information: www.torano.com. Please also follow Toraño on Face book: Toraño A family Cigar Company or on Twitter: @TORANOFAMCIGARS.