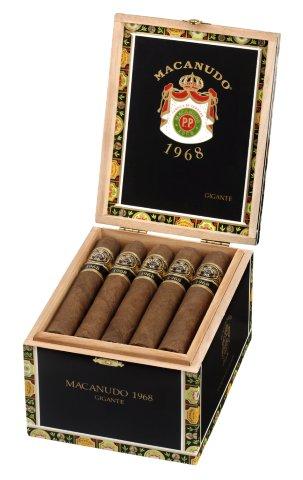 The new pricing of Macanudo 1968 is currently being made available exclusively at brick and mortar retailers across the U.S.

Bill Chilian, director of marketing commented, â€œSince the debut of Macanudo 1968 in August of 2008, the brand has enjoyed critical acclaim and has received high praise from brick and mortar retailers across the country. We recognize that Macanudo 1968 is a strong product with tremendous potential and decided to revise the pricing structure to make the brand accessible to a broader range of cigar enthusiasts.â€

About Macanudo 1968
Macanudo 1968 is made completely of tobaccos which are either grown by General Cigar or cultivated for the company under an agreement of exclusivity. Harvested one sun-ripened leaf at a time, aged in tercios and charcoaled wooden barrels to further enrich its flavor, the blend marries proprietary Dominican and Nicaraguan tobacco to a tobacco cultivated solely for General Cigar in the remote Nicaraguan island of Ometepe. These tobaccos were developed expressly to complement the hearty Connecticut Habano binder and flawless, lustrous Honduran San Agustin wrapper.

Macanudo 1968 is aesthetically pleasing, with the brandâ€™s characteristic round head and immaculate construction evident at the first glance. From the first draw to the last, deeply complex yet balanced flavor envelops the palate with a freshness that celebrates inherent natural sweetness from the soils that bore each tobacco.