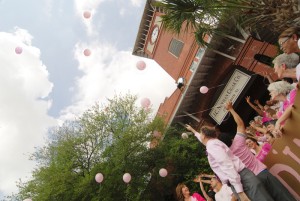 J.C. Newman hosts a Pink Out to support colleague with Breast Cancer

TAMPA, FL â€“ On Thursday, April 7 J.C. Newman Cigar Company hosted a company-wide Pink Out to support a colleague with Breast Cancer. When announced to the staff, the simple idea to wear pink grew into much more.

On the day of her surgery, everyone at J.C. Newman, office staff, cigar rollers, executives, mechanics and even the salesmen across the country donned their best pink shirt and handmade pink ribbons in her honor.

At 3:15 pm the group gathered on the steps to announce to Ybor City, â€œWe Think Pink!â€ Tampaâ€™s local FOX station was on scene to film the entire ceremony.

Before heading back inside 12 prayer balloons were released. A cultural tradition suggested by one of the employees, each balloon included a prayer from each department inside and as a group we released them all to the heavens.

â€œWe are a family company and this is what you do for family,â€ said company President Eric Newman. â€œThis day was only possible because of voluntary contributions from each department and I am so proud of everyone coming together to show support for one of their colleagues.â€

J.C. Newman and its employees actively support the local community. From founding charities, to sitting on boards and volunteering during free time, employees are encouraged to give back to the community however they can.

Founded in 1895, J.C. Newman is America’s oldest family-owned premium cigar makers and also the last operating cigar factory in Cigar City. With a portfolio of famous brands from the ultra-premium Diamond Crown and Diamond Crown MAXIMUS to Cuesta-Rey, La Unica, Brick House, El Baton, to our value-priced Quorum and Factory 59’s, the J.C. Newman name is synonymous with excellence in cigar manufacturing.