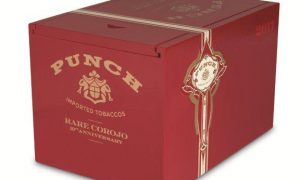 Richmond, VAâ€”The highly-anticipated 10th anniversary edition of Punch Rare Corojo is about to be made even more exciting with the release of a new, limited edition frontmark which will debut at tobacconists nationwide beginning in late March.

Called Rare Corojo 10th Anniversary, the 5â€ x 50 frontmark is unique in that it will feature a proprietary Connecticut Corojo wrapper. The new cigar will begin selling in late March for a suggested retail price of $6.50 per cigar until the limited supply is depleted. The cigars will be packed in eye catching cabinet style red wooden boxes and can be easily identified by a secondary red-and-gold band that bears the Rare Corojo distinction.

Rick Chandler, director of marketing for Punch cigars commented, â€œFor ten years, cigar enthusiasts have looked forward to the annual return of Rare Corojo, a brand that features a unique reddish-brown wrapper and epitomizes the best of what Punch cigars offer â€“ a spicy no-nonsense blend at a reasonable price. This year, weâ€™re pleased to have upped the ante by offering the classic Punch Rare Corojo along with the standout new taste of the 10th Anniversary frontmark.â€