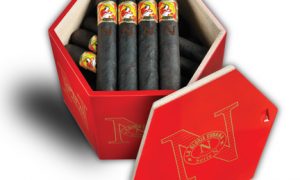 Richmond, VAâ€”Team La Gloria CubanaÂ® has designated Friday March 25, 2011 as Serie NÂ® Day and will commemorate the occasion with the premium cigar categoryâ€™s first-ever national virtual cigar tasting which will be broadcast on www.lagloriacigars.com/serien.

Select Serie N retailers across the U.S. will participate in a live, open forum chat on Skype which will be part of the virtual broadcast. Participants watching live on the website will be able to communicate directly with Team La Gloria members and with fellow Serie N enthusiasts through tweets and Facebook updates which will be addressed by Team La Gloria members during the broadcasts.

Director of Marketing Michael Giannini commented, â€œSerie N is a very unique cigar, both in taste and appearance, so we created an innovative event to capitalize on the buzz thatâ€™s been generated for the product within the digital media space. By including the retail community and in welcoming questions and comments from our existing consumers and those who may be enjoying the product for the first time, we will be able to ride the groundswell by capturing increased interest in the product.â€

To get in on the excitement surrounding Serie N cigars, consumers of legal smoking age are invited to pick up the March issue of Cigar Aficionado which contains a coupon for a free Serie N cigar, redeemable by accessing the list of participating cigar retail shops across the U.S. available on the Team La Gloria website: www.lagloriacigars.com.

Leading up to Serie N day, Serie N social media promotions will take place on Facebook (www.Facebook.com/teamlagloria), Twitter (www.twitter.com/lagloriacigars), YouTube and the Team La Gloria site. Detailed information about these promotions can be found on the â€œpromotionsâ€ section of the Team La Gloria website.