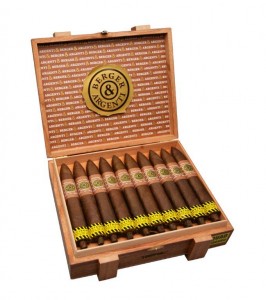 ENTUBARÂ® QUAD MADURO is a full-bodied, super-premium extension of the sensational ENTUBARÂ® cigar brand which was unveiled to the public a year ago at IPCPR. Like ENTUBARÂ®, the QUAD MADURO pays tribute to the time-honored Cuban cigar making technique known as â€˜entubarâ€™ while also establishing a revolutionary new process of manufacturing premium cigars.

Each deeply aged Nicaraguan filler leaf that comprises the ENTUBARÂ® QUAD MADURO blend is carefully rolled creating delicate â€˜scrollsâ€™ of rich, flavorful tobacco. This age-old method ensures open chambers of air flow from the foot to the head of the cigar. The ligero tobacco, which lends the cigar its unique full body, are bunched independently and then placed into the center of the remaining â€˜entubarâ€™ rolled filler blend. This â€˜channelâ€™ of ligero tobacco ranges the full length of the cigar and extends Â¼â€ beyond the finished trimmed foot, creating a startlingly unique â€˜fuse likeâ€™ appearance that assures a superior draw, flawless conical burn with a long white ash, and a myriad of complex flavors channeled directly onto the palate. ENTUBARÂ® QUAD MADURO is â€˜cuadradoâ€™ pressed Habano and comprised of all Cuban-seed Nicaraguan (viso and ligero) and Dominican (seco) fillers, a savory Nicaraguan binder, and skillfully enveloped in a rich, dark Jalapa Valley-grown Maduro wrapper crop aged eight years in seasoned oak barrels.